Qualcomm turned the laptop world upside down last year with the introduction of the first mobile processor-based laptops, but, despite early promises, it took some time to get their hands on one for testing. We liked the HP Envy x2 (Snapdragon) but it had its limitations and it was quite expensive. Today, Qualcomm aims to take Windows laptops based on Snapdragon to the next level with the introduction of the Snapdragon 8cx.

The new chip aims to deliver a feature set similar to that of the Snapdragon 835 from the HP Envy x2 last year and the laptop-specific Snapdragon 850, introduced earlier in 2018. This time, however, it dramatically increases power and the capabilities of the chip. in an effort to remedy the lack of oomph of previous generations. And it also promises better battery life, thanks to the 7nm chip manufacturing process. Indeed, with Intel still stuck at 14nm, this is the very first 7nm laptop chip. Times, they change.

READ NEXT: Qualcomm Snapdragon 855 preview – your next flagship smartphone is going to be a beast

Snapdragon 8cx laptops will always be “always on, always connected”, so they will have 4G connectivity up to 2 Gbps through the Snapdragon X24 modem. Like the original 835-based Snapdragon laptops, they’ll be fanless and behave just like a giant smartphone, receiving messages and issuing notification alerts even in sleep mode.

Qualcomm also made performance comparisons between the Snapdragon 8cx’s Kryo 495 processor and an unspecified 15W competitor. This is an oblique reference to what is almost certainly an Intel Core i5 U-series, the chip found in most ultralight laptops between £ 1,000 and £ 1,500. At 15W, Qualcomm claims the 8cx is comparable to this chip while at 7W it is twice as fast.

Perhaps more important than all of this, however, is the collection of laptop-centric features that the 8cx will support. High speed NVMe SSDs are supported. Large applications should therefore be launched as quickly as on Intel ultraportables. There’s also USB Type-C (USB 3.1) support, so you’ll be able to connect high-speed external storage, and you’ll be able to connect external monitors as well – up to two 4K HDR displays, to be precise. 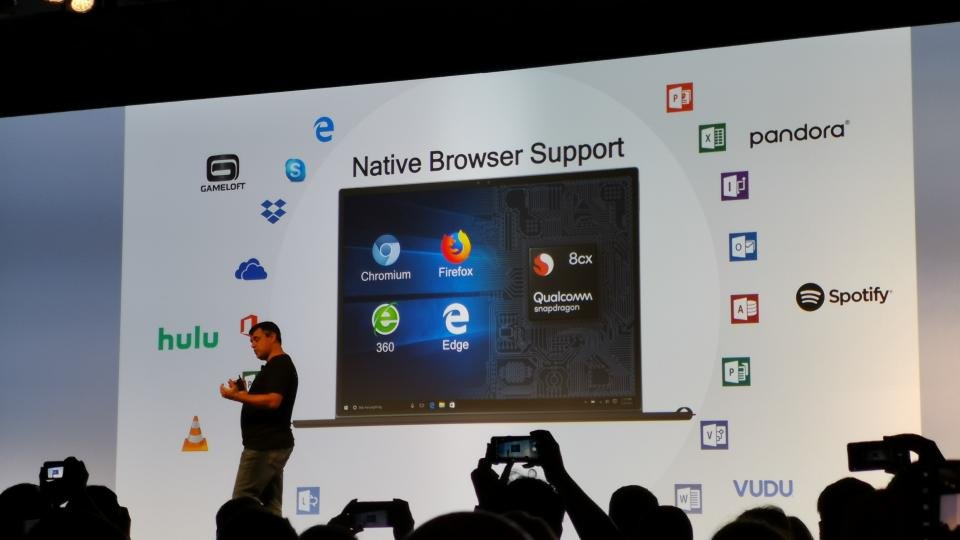 One of the big hurdles for Snapdragon laptops so far, however, has been the software and those limitations have been partially addressed here and with the 8cx’s ability to run Windows 10 Enterprise, Snapdragon laptops will now be a big hit. option for mass, enterprise-level deployments. Laptops with the 8cx inside should also be able to run 64-bit applications, but since Microsoft has only recently given developers the tools to produce 64-bit applications for Snapdragon laptops, these- these will take some time to be broadcast.

But Qualcomm is starting to start work on native apps and has worked diligently at least on the browser side of this thorny issue and it has shown fully working versions of Chromium and Firefox browsers running in native ARM64 code. Most other apps outside of the Windows app store will still need to run using an additional layer of software that translates the Snapdragon chip code but, as Qualcomm demonstrated at the launch event , the extra power of the 8cx should help applications. running this way to feel more lively and responsive than before.

This is all good news, but despite the presentation of the new Snapdragon 8cx chip running on demo devices, no commercial design was revealed at launch. It is more than a little disappointing. Qualcomm has invited Lenovo spokesperson Matt Bereda to talk about the new chip, however, so expect new machines from Lenovo soon enough. I would expect launches at CES 2019, so you shouldn’t wait too long.

Whether laptops running Snapdragon chips will actually take off remains to be seen.. In theory, this is a great idea. The promise of increased battery life, constant connectivity and power comparable to that of an Intel Core i5-based machine is certainly appealing. And the ability to run Windows 10 Enterprise means that large companies will now be able to equip their employees with such machines as well.

But Snapdragon laptops will need to be priced below the devices we’ve seen so far to get customers to buy them. They’ll need to be faster and more reliable than the first generation of Snapdragon laptops, and they’ll also need to be able to run all Windows apps. We won’t know if all of these issues have been resolved, however, until we have the product in our hands and it’s unlikely to be before summer 2019.